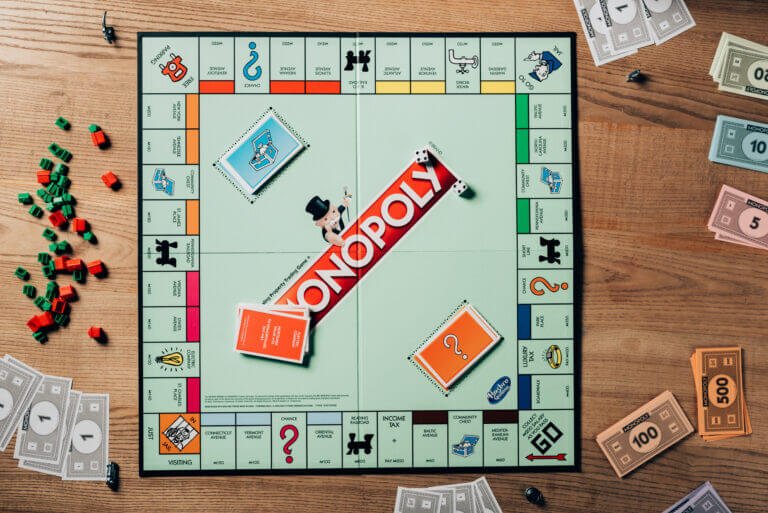 Board games are always a hit in family gatherings or even while spending a dull evening. Undoubtedly one of the most popular board games is Monopoly. In early 1934, Charles B. Darrow invented Monopoly, which was officially launched by Parker Brother in the later year.

Now the game has become so popular that if anyone says “land on free parking”, “monopoly money” or “getting out of jail”, everyone understands what the speaker is implying.

So, what is this game all about? Unlike other board games, Monopoly is all about cash going in and out of a central bank. Two or more players are needed to roll the dice and buying or trading properties. Thus, the more money you have, the more property you own. Hence, get rich.

On the other hand, players can even get bankrupted too. The winner will own all the properties and money at the end. The design of the game depicts that the rich get richer and the poor get poorer. Currently, the latest Monopoly editions are available with more fun features in 114 countries with 47 languages.

You do not need any special skills to play this game. Still, if you’re a newbie or an intermediate player, then you might be wondering about how much money do you get in Monopoly? This guide will help you to know the details.

How Much Money Do You Start With in Monopoly?

The game is about making money and buying properties to win. There is a central bank from which the money flows in and out. You need to know certain things when it’s about Monopoly money:

1. How much money each player gets initially in Monopoly

2. How much money gets left in the bank

3. What if the central bank runs out of Monopoly money

Otherwise, the rules are simple- the more money you get left with, got better chances of winning the game.

Let’s first understand how to manage all of the Monopoly amounts:

In recent editions, there are a few changes in colors. Such as

Also, there are now 30 bills for each cash. Even $1000 bills are available too in the mega online edition.

Additionally, you can hide your wealth from other players as the game continues further.

Money in the Central Bank

In the previous editions of the game (launched before September 2008), the central bank used to start the game with $15,140. To represent the game’s expansion, in all the latest editions, the bank begins the game with $20,580, accounting for inflation.

The thumb rule is that the Monopoly central bank never runs out of cash. If there are many players involved in the game, then distributing money between them can make the cash fall short. But, you can add as much cash as you want. You can use paper, poker chips, like Monopoly money.

In case you are a perfectionist, and you want to play only with Monopoly cash, then there is an option, you can purchase it from a toy store, hobby store, or online.

As already said, every player gets $1500 real Monopoly money at the beginning. However, the dollar bill distribution may vary in different editions of the game. However, in the end, the total amount, to begin with, adds up to $1500. All the rest of the cash and hardware go to the bank.

Handling the bank’s assets is an important task. That’s why generally, each team assigns a player as the banker. Does this mean that the banker cannot participate in the game? Well, he can, but he has to keep his cash and properties away from the bank.

As the game proceeds, players start buying properties. If a player lands on a property and doesn’t want to buy it, the bank starts an auction. The highest bidder gets that property. A player can even ask for a bank loan or another player to continue being in the game.

How to Play Monopoly?

Now you have a clear idea about Monopoly starting money and distribution. Let’s discuss how to play and how much money do you get in Monopoly.

The original US Standard Edition of Monopoly has officially set the game instructions in 2008. However, many families set some different rules, which is also okay.

The main objective is to get richer by buying and selling properties, collecting rent and trading using smart strategies. Focus on saving your own money while making others spend their cash.

Minimum two and a maximum of eight players can participate in this game. The players move around the board to buy or sell properties to get richer to win.

The main components required to play are:

How to Start a Monopoly Game?

Rules For The Board Spaces and Actions

Each space represents a specific property. Monopoly has 40 spaces with 28 properties, including 22 Streets, 4 Railroads and two utilities (3 Chance spaces and 3 Community Chest spaces). The other spaces are a Luxury Tax space, an Income tax space, four corner squares such as Go, Free Parking space, Visit Jail and Go to Jail.

Before starting the game, it’s important to know the basic actions for each board space.

How Much Money Do You Get in Monopoly?

There are some rules and guidelines to follow on Monopoly. How much money do you get in Monopoly completely depends on how you play the game.

Hence, play carefully and strategically. Your objective is to survive the game till the end. Get control over your properties and collect more rent from others. So as soon as the other players run out of cash, you can win.

It’s essential to learn which properties are most visited. So that you can buy them before your opponent owns them.

How to Make Money in Monopoly?

The simple answer is: play smart and win the game. Monopoly will end with only one player while others go bankrupt. As long as you have the highest priced or all the same colored properties, you will have a chance.

Here are some tips for you to make money on the Monopoly:

Finally, to answer your question on how much money do you get in Monopoly is the initial amount $1500 plus you win the amount at the end.

Playing monopoly can be a serious yet fun money-making indoor activity for both the kids and the adults. To play it like a pro, you can keep a calculator to track your buying, selling or mortgage, or rent.

On the other hand, Monopoly is also a good learning activity for young kids, as they have to do quick addition/subtraction throughout the game. Plus they also learn something from the bargaining properties, estimation of amounts, etc. Morals like “cheaters always lose at the end” or “set some rules to win” do create a sportsmanship spirit in them.

In short, Everyone can test their skills, patience through this adventurous game, Monopoly. Play as long as you understand the strategy to win it.